Bakening — extinct strato volcano in the east of the Kamchatka Peninsula. All rugged, covered with jagged ridges and sharp rocks Bakening rises to 2278 meters above sea level.

Located in the upper river. Kamchatka, faster and Avacha. The most beautiful place! Your photo collection replenished with unique views and the beauty of the peninsula.

During his high, watershed situation, before it was called Kamchatka top. Since it originated from one of the largest rivers of the peninsula, such as the Avacha, Fast and Kamchatka. But he had also earlier name — Bakang — Coach hut. The so-called indigenous people raised above ground storage of dried fish, sleds and everything could chew wolverine or dog.

Bakening ceased its activity in prehistoric times, but to replace it appeared several generations of small volcanoes. Many of them have collapsed, others have kept their shape well. The largest of these volcanoes is Novo — Bakening, poured out two large lava flow. One of them blocked the valley of the source of the Right of Kamchatka and formed a lake Demidov (Far). Another hit Bear Lake (Nameless), ended here high, steep cliff. 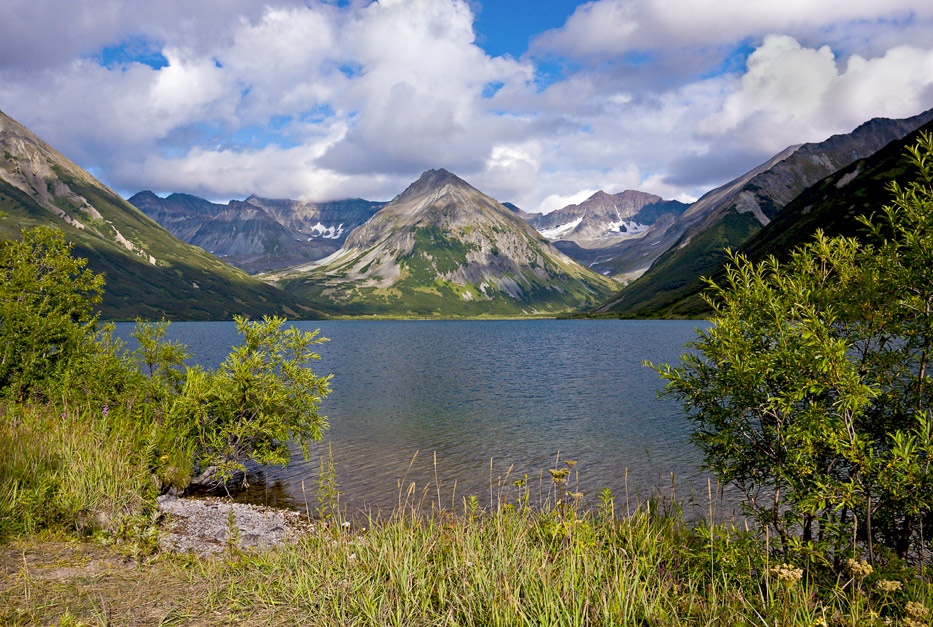 Other lava flows also reached the neighboring valleys of rivers and dammed lakes formed a few. Now Bakening surrounded by a necklace of lakes: Demidov Suslikov — from the north, bear, Avacha — from the east, Rosomashim Egorova, High — from the southwest. Bear Lake and Avacha — flow, all the rest — stagnant. Going on inland lakes the water is filtered through a lava dam and knocked out somewhere below-freezing strong keys.

In its own beautiful beaches surrounded by rocky alpine lakes and Rosomashe Egorova. Even scrub vegetation here, at an altitude of 1000 m, is almost absent, around a rock, scree, lava boulders so little stunted grass. A little more life to see the lake is high, occupies a spacious valley. Much more shrubs along the banks of lakes, lying below — Bear and Avacha, in which call for spawning salmon and where loaches live.

To the south of Bakening is an isolated group of volcanic cones. One of them blocked the river valley and formed a lake Kostakan. It is situated well below its northern neighbors, and around a lot of greenery, flowers and berries. The lake trout is found on berry plantations often bears graze.

The process of movement from: car, on foot

1 day. Meeting the group at the site of collection. Check out the SUV toward the Koryak village where the road rises towards Bakening volcano. On the way stop at the most picturesque places. The journey takes 5-9 hours. (Depending on road conditions). Arriving at the foot of the volcano. Accommodation in the tent camp.

Day 2. The yield on the route. The trail runs along the plateau of the volcano, overlooking the beautiful lake of Kamchatka, amazing rock landscapes and wild uninhabited places.

Return to the camp.

3 day. The total collection. Drive an SUV in the city of Petropavlovsk-Kamchatsky. The journey takes 6-9 hours.

At the request of a group tour can be modified, extended! (Round about the change must be reported within 3 days)

Number of tourists in the group: 3 to 8 people.

It is important to know! If weather conditions are unfavorable for the tour, it may change the planned route, including the date and time of departure.

Our company employs translators with knowledge of different languages of the world. We will be happy to answer all your questions. E-mail: kamchattour@gmail.com
Tel: +7 (914) 024-34-39